I was recently given the privilege to interview the voice actress, Kari Wahlgren, about her upcoming animated Netflix series, Archibald’s Next Big Thing. Based on a book co-written by actor, Tony Hale, Archibald’s Next Big Thing features Tony Hale as the voice of a young, curious chicken named Archibald who lives in the town of Crackridge with his brothers and sister. He ends up in predicaments at times, but with the help of his family and friends, including his best friend bee, Bea, voiced by Kari Wahlgren, he manages to solve his problems.

Rotoscopers: Oh my gosh, it’s so cool to talk to Kari Wahlgren! How are you, miss? Thank you so much for doing this interview!

Rotoscopers: I’m a big fan of you and pretty much every voice actor in the business. You guys are awesome and an inspiration to all of us! I plan not to take too much of your time, no more than 10-15 minutes.

Rotoscopers: So first of all, I wanna say thanks again for coming on the interview! And second of all, you have such an extensive filmography. I’m looking at it here. You’ve done so much work in anime, so many TV shows from Phineas and Ferb to Teenage Mutant Ninja Turtles to The Winx Club and now you have the new DC Super Hero Girls and DuckTales reboot and Dorothy and The Wizard of Oz. I guess my first question is what made you get into voice acting in the first place?

Kari: You know, I was such a fan of cartoons when I was a kid. I loved cartoons! I would watch them and memorize them and kinda run around the house and recite the lines. Apparently when i was about 5, I told my parents I would be the voice of a Disney cartoon one day. So I guess I always kinda knew at a young age that there were people doing voices behind the cartoons that I loved. And as I got older and did more theater and singing in public, I just always kinda wanted to find a way to do voiceovers. So when I graduated from college and I was working in Kansas City for a little while, I started auditioning for radio spots and things like that. And then when I moved out to Los Angeles, I started auditioning for any sort of animation or anime projects that I could find and it just started to kinda take off. And here we are…the rest is history!

Rotoscopers: And here we are…if it wasn’t for that journey, we’d never be on the phone right now!

Rotoscopers: So I know we’re talking about your newest project which is the Netflix DreamWorks animation show, Archibald’s Next Big Thing. I know this was based on a book which was co-written by Tony Hale who was the voice of the main character, Archibald. Were you familiar with the book prior to getting on the show?

Kari: You know, not prior to the pilot, but when I came in to do the pilot…Tony and I had actually worked on another cartoon series a number of years ago called Good Vibes. So when I went in to work on the pilot, I said, “Tony, I don’t know if you remember me, but I did this show with you”. And we got to chitchatting and he had a copy of the children’s book that he had written and he actually signed it and gave it to me. And it was charming! The book was so lovely and the pilot was so sweet and I just remember thinking, “Man I really hope that this gets turned into a show”! And it did. So that’s how I got a chance to read the book! 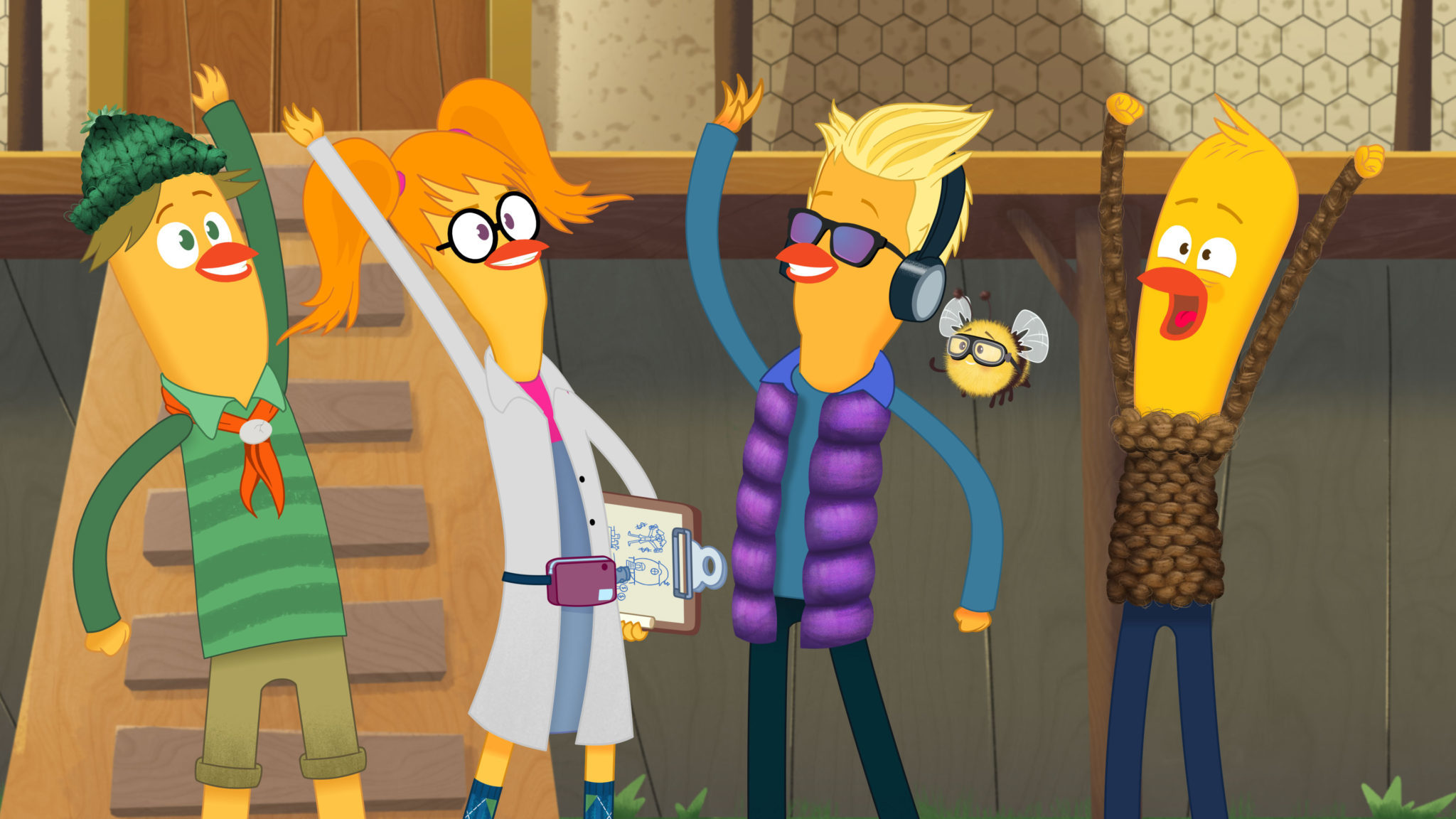 Rotoscopers: Yeah, I totally get that, I haven’t read the book but I have been watching the show. I’ve watched 10 episodes and have like 3 more to go.

Kari: Yeah, I think charming is absolutely the perfect word for the show. The main character, Archibald, is so lovable. He has such a wonderful positive attitude and it just makes you feel good to watch the show, so I think basically we need that right now.

Rotoscopers: Then your character, Bea, is sort of, would you say the best friend of Archibald or the pet of Archibald?

Kari: Yeah, I would definitely say that Bea is Archibald’s best friend and his sidekick on all of his adventures. Every once in a while she has to smack her forehead a little whenever Archibald gets them into another tricky situation, but she’s always there to support him and try to help him get through the next big thing.

Rotoscopers: I mean, I don’t want to give anything away but I would safely say that Bea saves Archibald in almost every episode.

Kari: (laughs) Yeah, she definitely helps out! She’s got a good little head on her bee shoulders.

Rotoscopers: Nice, and one interesting thing about this character is that this character doesn’t speak or at least not in words we understand; it’s all emoting through buzzing. What was that like to give a voice performance that wasn’t in English, but that was bee sounds, shall we say?

Kari: I was definitely nervous about it when we started because I know such great guys in the voiceover world like Frank Welker and Dee Bradley Baker who have brought non-verbal characters to life, you know, just through sounds. And I was really hoping to create a fun lovable character with Bea that was all through buzzing and sounds and everything. And I think we’ve done a pretty good job with that!

Rotoscopers: You definitely did. You’re definitely up there with Frank Welker and Dee Bradley Baker in terms of that level. Were there any surprise cameo voice roles you did in the show besides Bea or was Bea pretty much the only one?

Kari: I’ve actually gotten a chance to do a lot of different voices on the show. I can’t say too much about who they are.

Kari: But the fun thing for me is that the people working on the show have just really really given me so many opportunities to just stretch and they’ve thrown everything but the kitchen sink at me as far as doing different voices in the show and I love that! Actually, my favorite thing is when I get to do all sorts of different character roles in a show.

Rotoscopers: I can imagine.

Kari: Just Bea alone would be a great character to do, but I’ve had a chance to do a lot of other things on this show. And I’m excited for the viewers to get to see it.

Rotoscopers: Nice, and for people who may be reading this interview later on and don’t know the process, do you guys record your voice sessions together at the same time or is it all done everyone individually?

Kari: You know, it depends on the project. Sometimes we record solo and then other times they get as much of the cast together as they can. With this project, it’s been a little bit of both. There have definitely been episodes where they’ve tried to get a few of us together to record in the same room and that’s always a lot of fun. There’s always great energy and any time I’ve gotten to record with Tony, it’s always been a lot easier to get into a little groove between Bea and Archibald. But there have also been some sessions where I’ve recorded by myself and that’s always fine too. We just kinda roll with whatever they have going on that day.

Rotoscopers: That’s wonderful! And I guess the last question I have is do you have a favorite episode of the season so far?

Rotoscopers: (laughs) They’re all so great!

Kari: Yeah, so I can’t say that I’ve got a favorite yet. I just can say that it is one of my favorite lead characters. And by that, I mean Archibald…it’s one of my favorite characters of a show that I’ve seen created in a long time. It’s just such a feel-good show and Archibald is darling and I love his relationship with my character, Bea, and I’m really excited for audiences to get a chance to see it! 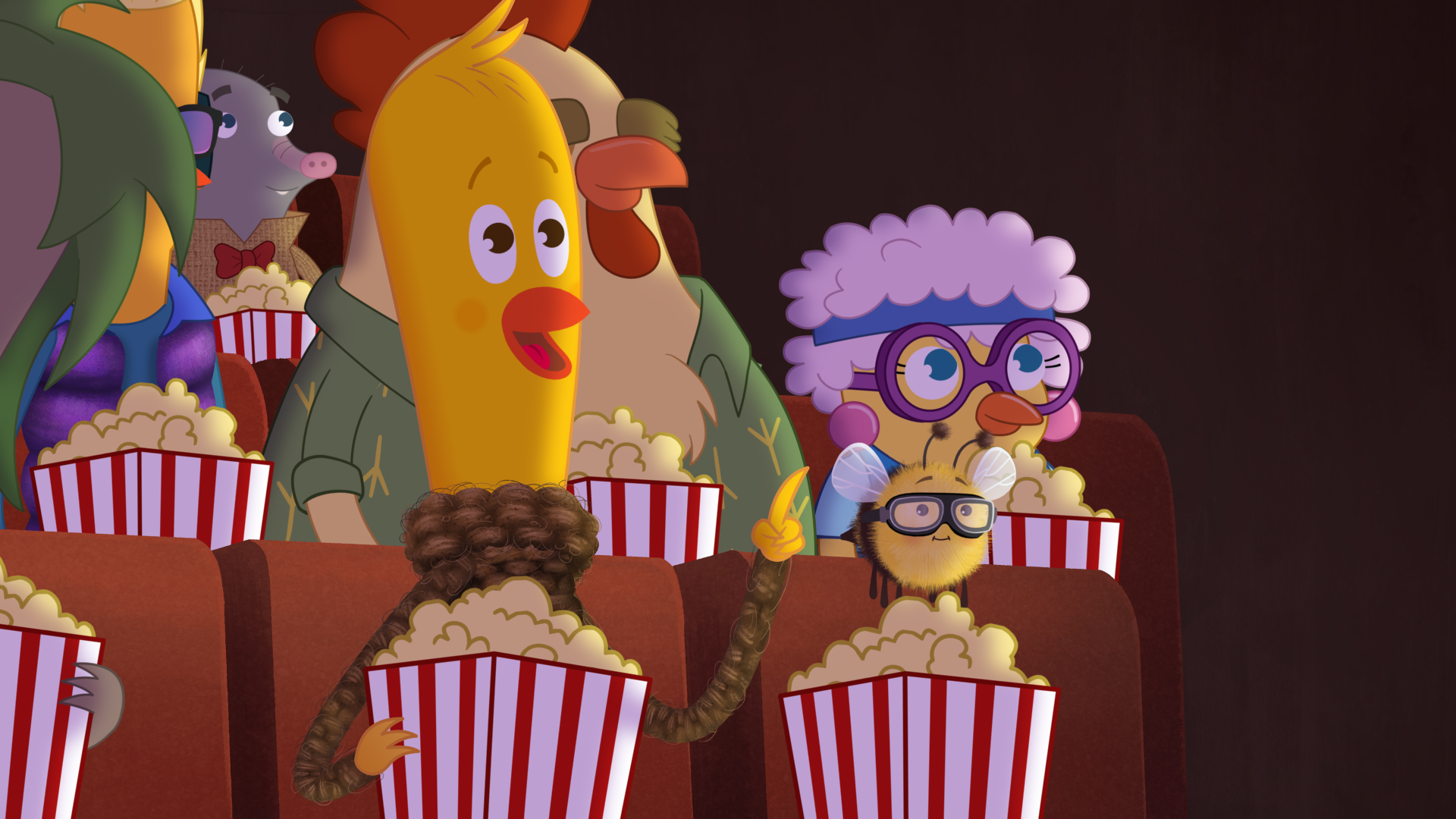 Rotoscopers: Yeah I’m really excited as well when people get to watch this on Netflix. Cuz I mean this show…I really wanna see a second season of the show, if not more.

Kari: (laughs) We all do! And I think charming is definitely a perfect word to sum up the show. It’s very charming!

Rotoscopers: Definitely charming! Alright Ms. Wahlgren, I’m so thankful for you for this time you’ve given me. I know you can’t see me but I’ve been grinning ear to ear just talking with you!

Kari: Aw, I’m so glad! Well thank you so much for making the time!

Rotoscopers: You’re welcome and for everyone else who will be listening in, I hope they check out Archibald’s Next Big Thing! Is there anything else you’d like to say about the show before we leave?

Kari: No, just please keep in touch to anybody out there that is on social media. I’m just @KariWahlgren on Instagram and Twitter and I love hearing from people, so keep in touch!

Special thanks to Kari Wahlgren for taking the time to do this interview! Follow her on Instagram and Twitter @KariWahlgren. And check out Archibald’s Next Big Thing on Netflix starting on September 6, 2019!