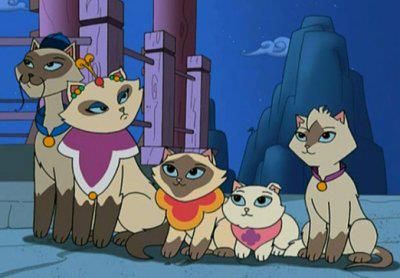 I think all of us who were born between 1994 and 2000 can agree that, at the time, PBS was the go-to network for educational programming. No doubt you grew up watching, among other shows, the literacy- and numeracy-promoting Sesame Street and Between the Lions, the wildlife-centered Kratts’ Creatures and Zoboomafoo, and, of course, the series that is the subject of this review: Sagwa, the Chinese Siamese Cat.

Based on the 1994 book by Amy Tan, this series follows the life of Sagwa Miao, a she-kitten of indeterminate breed living in the palace of the Foolish Magistrate in pre-colonial Hong Kong, where she and her family work as scribes, using their tails as calligraphy brushes. Outside of their duties, Sagwa and her siblings, Dongwa and Sheegwa, frequently go on escapades with their friends outside the palace, and from these adventures learn important life lessons, as is the norm for children’s shows.

As the eponymous star of the series, Sagwa makes for a great protagonist—adventurous, playful, creative, kind-hearted, and inquisitive. She’s evidently the most mature of the litter, whether calling out her big brother Dongwa on his cockiness or acting as a mentor of sorts to her baby sister Sheegwa. Of course, her mischievous nature frequently lands her into scrapes, but she manages to learn from her mistakes. And she couldn’t have a better friend (and foil) than Fu-Fu, a charmingly nerdy and rather clumsy glasses-sporting bat who serves as her conscience. 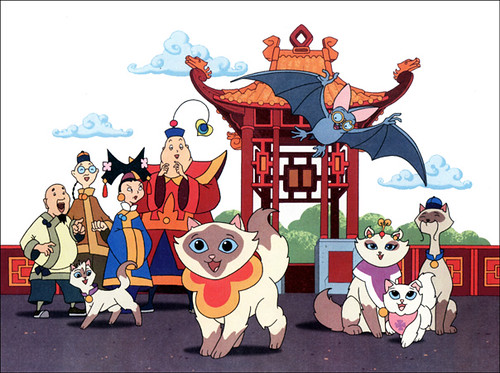 Of course, the human characters are handled very well, too. The Foolish Magistrate, true to his name, can be a bit oblivious at times and can make senseless or ill-advised decisions, but overall, he is shown to have his family’s and his people’s best interests at heart. Even his irritable and very snobbish wife, Tai-Tai, is allowed to show her redeeming good side from time to time. See-Yeh Shi-Yi, the Reader of Rules, also makes the most of his role as the unofficial adviser to the Magistrate, and I commend him for the way he puts up with all the mishegaas from those around him. (Really, whatever that poor guy gets paid, it must not be enough…)

But the best thing about Sagwa has to be the great attention it pays to ensuring an accurate and unbiased portrayal of Chinese culture. This is evident not only in such details as the architecture or the characters’ clothing (which some say places the series during the late Qing Dynasty), but also in the music, allusions to Chinese folklore and mythology, the messages about family obligations and loyalty (which are an inherent part of Chinese culture), and even the use of words and phrases in the Chinese language. I don’t think I’ve ever seen a better example of cultural authenticity in a Western animated production prior to Moana and Coco.

Sagwa, the Chinese Siamese Cat is a lovingly-crafted and charming masterpiece of educational television, with lessons in accountability and devotion to family, as well as awareness and understanding of other cultures. In this day and age, we could really use more shows of this nature, and it pains me that it didn’t last longer. We can only imagine what other adventures Sagwa might have had, but those of us who grew up watching this series will never forget it.

Did any of you grow up with Sagwa? If so, what are your memories of it?

[REVIEW] 'The Animals of Farthing Wood'