It’s an exciting time to be a Star Wars fan, what with Disney having bought Lucasfilm and Episode VII underway, not to mention the imminent arrival of Star Wars: Rebels. Despite all the exciting new content, the hardcore fan of the Original Before-Jar-Jar-Han-Shot-First-What’s-A-Midichlorian Trilogy can still geek out about recent revisits to A New Hope, The Empire Strikes Back, and The Return of the Jedi. Today I want to talk about Star Wars Storyboards: The Original Trilogy. It’s the latest Star Wars archive compilation from J.W. Rinzler, author and editor for Lucas Licensing. I was very impressed by this previously-unreleased comprehensive collection of storyboards!

For the uninitiated, storyboards are a story development process where artists plan the composition and action of a shot by drawing it first. Think of a storyboard as a comic strip for cinematographers and VFX workers to read so they know what to put on camera. Star Wars Storyboards: The Original Trilogy starts with an introduction by Joe Johnston (director of The Pagemaster, Jumanji, and Captain America, the First Avenger), who started his film career working as a storyboard artist for Lucasfilm Ltd.

Throughout the book, you will find commentary by Johnston and the other storyboard artists included with the images. From there, we’re launched right into the exciting opening scene of A New Hope. All of the major sequences from Episodes IV – VI are covered. Be advised, however, that not every scene in the Original Trilogy is given coverage in this book. However, you can expect to see boards from the sequences that included visual effects. Clear communication between George Lucas and Industrial Light and Magic’s VFX arists seems to be the main purpose of these storyboards in the first place. 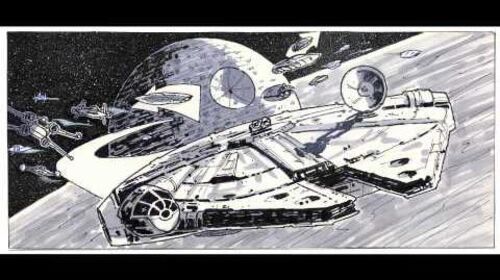 It’s worth mentioning that the format of this art book is more than satisfactory. The pages are well-designed for an art book; that is, nothing diminishes or distracts from the central focus of the publication. All of the storyboard images are displayed with excellent quality and clarity. You can even see where the artists switched between cool grey and warm grey markers in the same board! There are even a few full-color boards, as well as a handful of boards that span two pages. Star Wars fans will also be very interested in the generous amount of unreleased material found in the book. Be prepared for some fascinating never-before-seen boards showing deleted scenes, scrapped concepts, and prototype character / vehicle designs. It was also interesting to see the same scene or sequence visually interpreted in different ways by different artists.

The careful reader will also notice how the book shows Lucasfilm’s growth into a major Hollywood production company. Joe Johnston even comments in the introduction that, when he was first brought to Lucasfilm Ltd, he didn’t even know what a storyboard was! I enjoyed seeing how the early boards from A New Hope were very experimental, still fleshing out the designs of key characters and environments. By The Return of the Jedi, however, the boards get very precise in design, composition, and lighting compared to the final film version. The speeder bike sequence on Endor, for example, matches the final film version shot-for-shot!

Star Wars Storyboards: The Original Trilogy clocks in at 352 pages and is a very well-designed and generous publication from the Star Wars archives. If you’re a lover of the original Star Wars trilogy and are interested in visual production and film / VFX design, go grab this book. This is one I’ll be revisiting again and again!