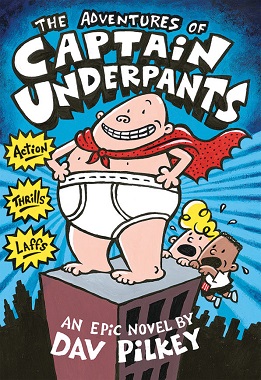 It looks like DreamWorks’ adaptation of the Captain Underpants book series is moving forward. The studio has announced some of the film’s cast today.

The Captain Underpants cast is interesting in that it’s not filled with celebrity A-listers that is typical of animated films today. Instead it features talented crop of comedians such as Nick Kroll (of Comedy Central’s Kroll Show), Jordan Peele (MadTV), Ed Helms (The Office, The Hangover), Kevin Hart and Thomast Middleditch. One thing is for sure: Captain Underpants is going to be a riot.

Back in October, it was announced that Shark Tale and Monsters vs. Aliens director Rob Letterman was at the helm of the project and that Nicholas Stoller (The Muppets) would be penning the script. This was the first sign that it was moving closer to production.

That cast is actually bigger than the cast for Trolls (which only consists of two people), which DreamWorks is currently planning to release in fall 2016. It’s possible that Captain Underpants may end up being the studio’s fall 2016 release with Trolls following in spring 2017. If not, then we might have a good idea of what DreamWorks will give us in 2017. The Croods‘ sequel is also imminent, plus Flawed Dogs now has a director – Noah Baumbach (The Squid and the Whale, also wrote the scripts for Fantastic Mr. Fox and Madagascar 3). DreamWorks’ 2017 slate could consist of those three films, or maybe not. Nothing is set in stone, especially with this studio, as they shuffle their schedule quite a bit.

From the press release:

Captain Underpants is based on Dav Pilkey’s popular book series and centers around two scheming fourth graders, George Beard (Kevin Hart) and Harold Hutchins (Thomas Middleditch) whose personal missions are to play pranks, hide in their secret treehouse and write comic books.  But when they accidentally bring their favorite comic book character, Captain Underpants, to life through a hypnosis accident involving their megalomaniacal principal Mr. Krupp (Ed Helms), their elementary school life becomes anything but elementary.   Rounding out the cast will be Jordan Peele who will voice Melvin, the nerdy nemesis of George and Harold, and Nick Kroll as the insidious villain, Professor Poopypants.

What are your thoughts on DreamWorks making a Captain Underpants movie? Good idea? Or unnecessary? Sound off below!