Many considered the Toy Story trilogy perfectly complete at the end of Toy Story 3. Was a fourth installment really needed? Depends on who you ask. And do the Toy Story 4 Blu-ray bonus features stack up? Keep reading to find out!

Toy Story 4 opens up hitting all the right high notes we’ve come to expect from Pixar: nostalgia, energy and emotion. And of course, there’s an Andy-playing-with-his-toys montage set to a new Randy Newman tune that immediately turns your waterworks to full blast. If you were on the fence about the necessity of a fourth movie, those qualms are immediately dispelled in the first 15 minutes. Until Forky is introduced and the film takes a massive shift.

While it’s been a few years since Andy’s toys have been passed to their new owner Bonnie, Woody is still having time accepting and finding his place in this new world. What do you do if your sole purpose in life is make a child happy, but your child doesn’t really care for you that much (or as much as your previous, beloved owner)?

The character of Forky is introduced as Bonnie’s new darling and serves as one of the catalysts for Woody’s journey and metamorphosis throughout the film. Forky is a newly created toy, but doesn’t want to be a toy and prefers to sit comfortably in the trash where he came.  Woody takes it upon himself to educate and convince Forky on why he should love being a toy. Translation: “I love being a toy, so here’s why you should too.” This could have been an interesting point to explore further in the film: we all have difference purposes in life and that’s ok; however, the Forky storyline, is one-dimensional and wraps up too easily.

With Forky set straight, the film moves onto rekindling the relationship between Woody’s long-lost love interest, Bo Peep. While Forky is about as flat as his spork handle, Bo Peep, on the other hand, is a deep, emotionally robust character, who has grown considerably since Woody (and the audience) last saw her. She embraces her feminine side and is also powerful and confident. Woody realizes that in the nine years since he saw her last, she has evolved into almost an entirely different person (ahem, toy) and this gets his the wheels spinning.

We do meet some more new characters who are all a lot of fun: a porcelain doll named Gabby Gabby, whose voice box was damaged in production; a Canadian motorcycle-riding Evel Knievel figure, Duke Caboom; and a mini figure Officer Giggle McDimples. However, venturing out to meet these new toys comes at the expense of many of the Toy Story regulars such as Jessie, Bullseye, Rex, Hamm, Slinky dog and Mr. and Mrs. Potato Head. Even Buzz Lightyear’s role has been diminished to that of a bumbling side plot.

Just like the Forky storyline, the conflict in the second half of the film wraps up too easily. Villains are given a free pass for heinous crimes and everyone lets bygones be bygones. The film would have packed a more mature, emotional punch if it had been brave enough to take risks in not giving certain characters what they wanted. Also, if you thought you were done with the tears in the first act, Pixar throws another emotional curve ball at the end that will leave you sitting in a puddle. 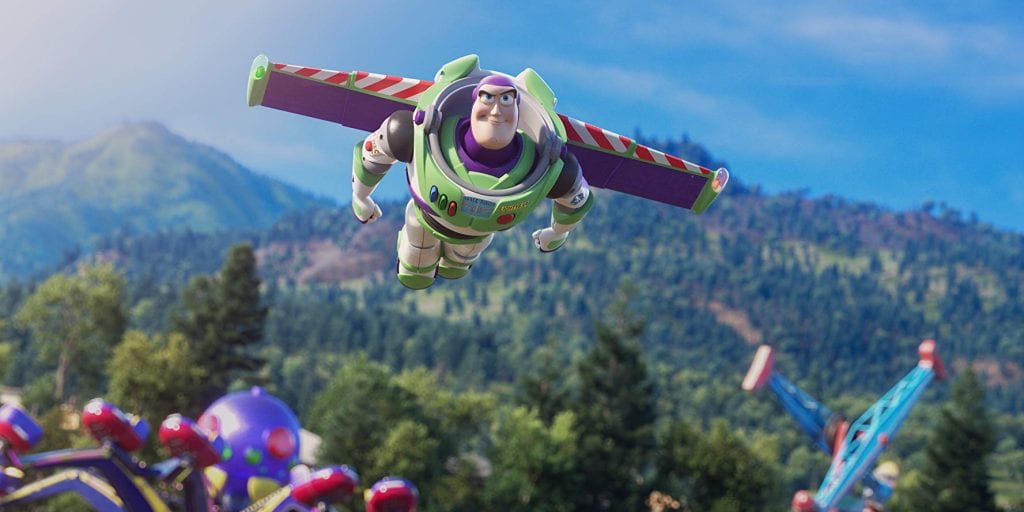 Toy Story 4 is a bit like junk food: it feels good in the moment, but lacks real substance. Will you have a great time? Absolutely. Will you laugh? Of course. But it may not leave you as satisfied as you were with the first three Toy Story films.

No matter what your feelings on the film, Pixar delivered with the Toy Story 4 Blu-ray bonus features! A lot of time, care and planning went into creating the various featurettes and the efforts does not go unappreciated.

While not a perfect film, a film collection isn’t complete without Toy Story 4 a part of it. The film opens a new chapter for the Toy Story characters and Blu-ray/Digital HD release has a fantastic set of bonus features to enjoy. It’s Pixar so it’s worth the buy!

An advance copy of the Toy Story 4 Blu-ray was provided by Disney.