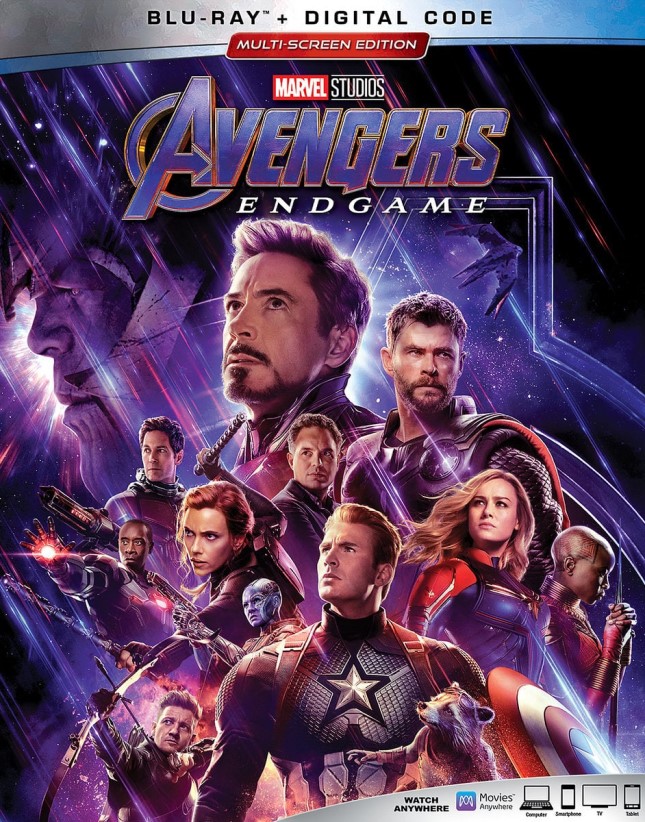 The biggest movie of the year is out now, and available to own on all platforms! Avengers: Endgame is now available on Blu-ray, and we’ve got all the details! Read on for a spoiler-free mini-review of the film, and a breakdown of all the Blu-ray extras!

I don’t know how much I can say about this movie without spoiling it for people who haven’t seen it yet, but I will say that this is literally one of the best films in the MCU. I didn’t know what to expect after Infinity War, which I really liked, but I didn’t love. It was a great movie, but as was to be expected, it was a bit of a downer. Which is fine, that’s what it needed to be in order to gear up for this one.

That said, Endgame surpassed Infinity War in every possible way. Number one, despite the apparent finality of some of the deaths, the ending was nowhere near the downer that the last one was. Most of my favorite characters got a lot more screen-time, including probably my most favorite MCU character, Ant-Man, who was pretty much the most pivotal character in the entire film. Which I especially appreciated, given that he wasn’t in the last one at all.

All in all, Endgame was one of the best films the MCU has produced so far. It had heart, humor, twists, and turns, and was everything I wanted from the movie, and so many things I didn’t know I needed. It was amazing, and definitely not to be missed.

There are a lot of great extras in this set, we’ve got character retrospectives, interviews, outtakes, and deleted scenes! Let’s get in to everything this set has to offer! We’ll start with disc one.

First off we have an intro by Russo Brothers, the directors of Endgame, you’re given the option to play this before the movie if you so choose.

Next we have an audio commentary by the directors and writers, Anthony and Joe Russo, and Christopher Markus & Stephen McFeely. Commentaries are always a nice inclusion. It seems like they’re getting rarer and rarer these days, so I love it when the studios take the time to get one together.

It’s kind of rare that Blu-rays have two discs these days, but given the length of the film, maybe all these extras wouldn’t fit on just one. Either way, this is what’s on disc two.

An absolutely joyful look back at he MCU cameos of Stan Lee. I rarely tear up at things, but I may have been a bit misty eyed at the end of this one. Stan Lee was such a treasure, and this was a beautiful look back at his time in the MCU.

Given where Endgame ends up going, it only makes sense to look back at the origins of the founding characters. This featurette looks back at what went in to the casting Robert Downey Jr. in the role of Iron Man, back at the very beginning of the MCU.

A Man Out of Time: Creating Captain America

Black Widow: Whatever It Takes

Yes there is FINALLY a standalone Black Widow movie coming, but given where her story goes in this film, it only makes sense to give her a retrospective featurette as well. This one, more than the other two, looks back at the character more than the behind the scenes.

The Russo Brothers: Journey to Endgame

This featurette is like the previous three, except about real people instead of characters. Joe and Anthony Russo are just as important to the MCU as the characters they’re bringing to life. Their vision has shaped these stories, and this featurette is a great way to get to know their contributions.

The Women of the MCU

A short featurette looking at the women of the MCU, featuring interviews with the actors behind the characters, talking about what the characters mean to the fans, and themselves.

Unlike the other retrospective featurettes on this set, this one looks at the character of Thor in this movie alone. Thor’s character arc took him in a completely new direction in Endgame, and this featurette looks into the processes behind his transformation.

Six deleted scenes from the movie. I’ll list the titles, but I’ll let you discover what they are when you watch them. “Goji Berries,” “Bombs on Board,” “Suckiest Army in the Galaxy,” “You Used to Frickin’ Live Here,” “Tony and Howard,” and “Avengers Take a Knee.” Most of these are a bit forgettable, but I kind of wish that last one had made it into the final film.

Sometimes when you’re watching a gag reel, it feels like they really had to scrape the bottom of the barrel to piece enough stuff together to make anything even close to worth watching. That was not the case here! The people in these films really seem like they’re having a blast, and the gag reel shows that. This was a fun watch.

If you are a fan of the MCU, you owe it to yourself to see this film. I know most of you reading this have probably already seen it, but for the three of you out there who were waiting for the home release, don’t wait any longer! The film itself is worth buying the set for, but there are plenty of extras here for fans who want to dive in deeper. Definitely check this one out.